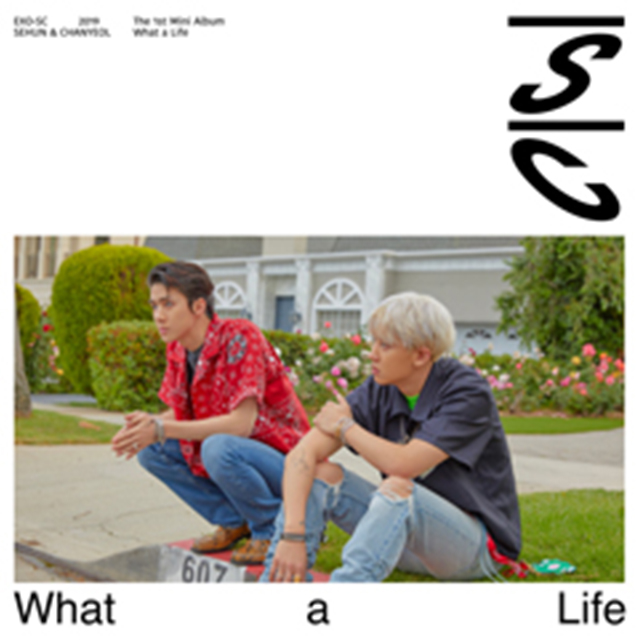 ‘New EXO Unit’, EXO-SC, Releasing 1st Mini Album, ‘What a life’, on July 22nd!
Six Songs including Triple Title Songs, ‘What a life’, ‘Just Us 2’, and ‘Closer To You’!
All Songs Produced by Gaeko and Devine-Channel, All Songs Partly or Entirely Written and Composed by EXO-SC!

The new EXO unit, EXO-SC (SM Entertainment), is releasing its first mini album, ‘What a life’, on July 22nd.

This album is the debut album of EXO-SC, the first duet unit of EXO, and it presents a total of six songs in various moods within the hip-hop genre including three songs designated as triple title songs, ‘What a Life’, ‘Just Us 2’, and ‘Closer To You’, to present diversity in two members’ music.

Especially, Dynamic Duo’s Gaeko and the hit composer team, Devine-Channel produced all songs in this album, Boi B and Hangzoo of the hip-hop group, Rhythm Power, as well as the Executive Producer GRAY of the hip-hop label AOMG participated in the making of the songs, and EXO-SC also participated in writing and composing all songs partly and entirely with great devotion. Great attention is drawn to high-quality music from this team of artists and their fantastic chemistry.

In addition, EXO-SC has won excellent responses even before the official debut with ‘We Young’, the duet they released through ‘STATION X 0’ in 2018, while SEHUN participated in writing and composing ‘Go’, his solo song he released at EXO concert, and CHANYEOL, title songs of EXO’s albums such as ‘Love Shot’ and ‘Ko Ko Bop’ and the song listed in the albums such as ‘With You’ and have already proven their capabilities in music. The new album is also expected to win great responses.

Meanwhile, SEHUN and CHAYEOL are enjoying global popularity as EXO’s members for their charming singing and performance as well as the outstanding visual, and also getting favorable responses for their activities in a wide range of fields including movie, drama, entertainment, and fashion, not to mention music. The new unit comprising these two artists is raising expectations further for the new images they would present as a unit.

EXO-SC, presenting diversity in music with tree title songs!
#Positive Energy ‘What a life’ #Refreshing Energy ‘Just Us 2’ #Emotional Energy ‘Closer To You’

The first title song, ‘What a life’, is a hip-hop song that features the unique pluck sound and addictive chorus. The lyrics give a cheerful message, ‘Enjoy working and enjoy playing’, and transmit EXO-SC’s bright and positive energy.

Also, the second title song, ‘Just Us 2’, is a hip-hop song that features addictive piano theme, clear and cool synthesizer, and refreshing melody. The lyrics interestingly depict a scene from a resort on a hot summer day.

The third title song, ‘Closer To You’, is a hip-hop song with emotional melody. The lyrics depict a guy’s heart that wishes to get closer to the girl he is interested in as if he is having an honest talk, making the song doubly charming.

This new album also includes ‘Line’ which arouses sympathy by expressing the ambiguous relationship between friends and lovers to a ‘line’, ‘Rollercoaster’ which compared the thrill that is felt from the intense love between lovers to the rollercoaster ride, and ‘Dream’ which maximized the sad mood of the song by expressing the yearning for the lover whom can be only met in the dream. All six songs will present diversity within the hip-hop genre.