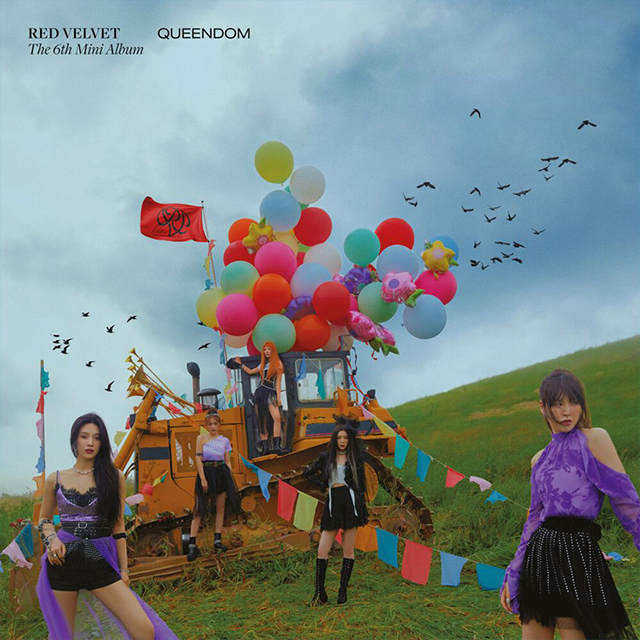 'Queendom' is a new album coming out in a year and eight months after ‘‘The ReVe Festival’ Finale,’ released in December 2019. The album carries six songs in various genres, including the title song, ‘Queendom,’ which is expected to draw great attention from music fans.

Also, a number of domestic and foreign producers and writers who have shown excellent musical chemistry with Red Velvet, such as the hitmaker KENZIE and minGtion, the world-renowned producer Moonshine and Andreas Öberg, and the well-known lyricists Jo Yoon Gyeong, Lee Seu Ran, and Seo Ji Eum, participated in the production to raise the album quality.

Especially, Red Velvet not only has proven their capability as the 'Summer Queen' by continuously releasing summer hits such as ‘Red Flavor’, ‘Power Up’, and ‘Umpah Umpah’, but also looking forward to showing fresh look through this album, after displaying a wide range of musical spectrum and excellent interpretation of various concepts through versatile activities as a group, unit, and solo artist, which led to receiving great love from music fans.

The title song, ‘Queendom,’ is a refreshing pop dance song that highlights addictive hooks and bright and cheerful vocals of Red Velvet. The lyrics convey positive energy with a message that all of us are the 'Queens' of our lives and shine more beautifully when we are together.

Also, an up-tempo pop dance song, ‘Pose,’ creates an exciting atmosphere through confident lyrics and exuberant vocals of Red Velvet. An electro-funk song, ‘Knock On Wood,’ has charming fairy-tale lyrics, making a wish for the other to like me back, based on the phrase, ‘Knock On Wood’, which is a customary action to bring fortune.

All of the six songs will capture your ears with diverse charms, including ‘Better Be,’ which metaphorically expresses a funny feeling of making the other fall for you boundlessly, yet not willing to give your heart easily, referring to the characteristics of cats in a witty way, ‘Pushin’ N Pullin’,’ which has sweet lyrics, telling the other who has been pushing and pulling against you to believe in our time and open their heart, and ‘Hello, Sunset,’ a slow-tempo R&B ballad song that captures a serene confession in late summer.