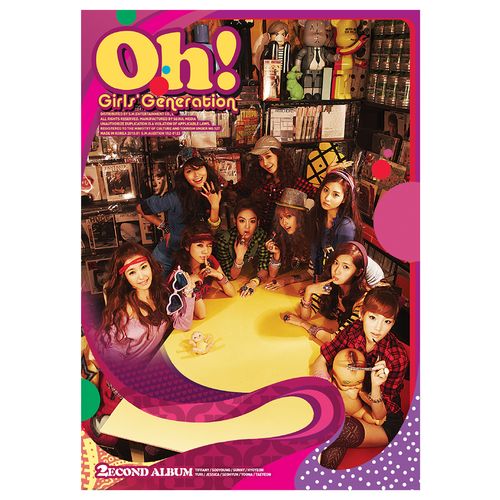 Everyone’s favorite female idol group, Girls’Generation, is conquering the world of popular song for 2 years in a row with the release of the 2nd album, ‘Oh!’ , on January 28. With the big hits like ‘Gee’ and ‘Genie’ , Girls’Generation conquered the world of broadcast and even advertisement, and they went on sweeping all the prizes at the various year-end awards to prove the nationwide popularity. The 2nd album, ‘Oh!’ , will also suggest the new syndrome to make a big hit in the world of popular cultures in 2010.

Great composers such as Kenzie, E-TRIBE, hitchhiker, Young-Suk Yoo, Chan-hee Hwang, Eun-hee Jo, and Jae-myung Lee have all joined to enhance the quality of a new album, and recorded 12 songs presenting more enriched vocal sounds and sensitivity of the mature 9 girls.

The title song of the 2nd album ‘Oh!’ is a refined electronic pop song presented by the hit composer Kenzie. This song irresistibly gives the pleasure to the listeners with the unique melody development as well as arrangement, exquisitely capturing the core splendor of the latest trend. In other words, it boldly changes the typical format of‘Introduction – Development – Refrain’by placing each part in the unexpected timing and making continuous alterations to represent the lively and cheerful energy of Girls’Generation. Also, the lyrics contain the candid and lovely way of the girls’confession to the lovers.

‘Show! Show! Show!’ is the work of ‘hitchhiker’ who composed ‘Abracadabra’ .The strong sound of the synthesizer based on Electro and Girls’Generation’s unique voice are combined perfectly to show new charms of Girls’Generation. Also, ‘Be Happy’ is a new club style dance music presented by E-TRIBE who created the hit song ‘Gee.’ The song’s unique style is coming through the trendy house rhythm while Girls’Generation sends the lovely but powerful message of encouragement to those who are exhausted and weary of life. Especially, both songs were pre-released in Girls’Generation’s The 1st ASIA TOUR‘Into the new world’and received great responses from the audience.

‘Talk To Me’ – First Duet by Jessica and Tiffany,‘Boys&Girls’– Featuring by SHINee’s Key

The First duet by Jessica and Tiffany , is called ‘Talk To Me’ presenting the voices of two members interwoven with the rhythm of mind-comforting bossabossa nova and beautiful arrangement which will bring the listeners to the world of fairies. The lyric about caramel-sweet love gives flutters to the hearts of the listeners to imagine a beautiful love. ‘For “Boys& Girls” , Key from SHINee did featuring and it has the characteristic with the groovy and authentic melody lines. The Original Korean title is referred from the book title called “Men are From mars, Women are from Venus”and song itself interestingly depicts the various happenings caused by the different way of thinking between the boys and girls.

Basically the album contains 12songs in total with various genres; ‘Forever’ composed by Jin-Hwan Kim who also wrote ‘One Year Later’ (The duet song of Jessica and ONEW), ‘☆★☆’ which delivers a fairy tale like tunes, ‘Day by Day’ containing the delicate emotion of Young-Suk Yoo, ‘Stick Wit U’ with addictive melody based on electronic dance and the legendary hit songs ‘Gee’ as well as Genie.’

Girls’Generation will actively engage in the various media fields, mostly concentrating on music programs and will make their first performance of ‘Oh!’ at MBC ‘Music Core’ on 30th of January.