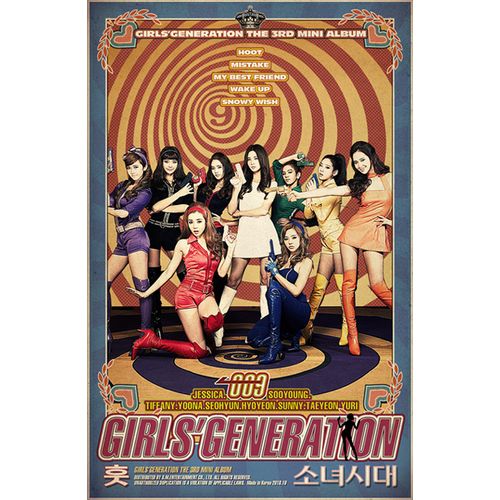 Girls’ Generation, displaying remarkable activities all over Asia, is making a splendid comeback with the new mini album ‘Hoot’ on October 27.

Girls’ Generation released the second regular album in the end of January and made ‘Oh!’ and ‘Run Devil Run’ consecutive hits, sweeping the music market in the first half of 2010 following the success in 2009. In August, Girls’ Generation made the official debut in Japan starting with a large scale show case with 22,000 audience and their first single album released in Japan in September, ‘GENIE,’ won the Gold Disc recognized by Recording Industry Association of Japan and renewed various records related with Korean girl group in the Oricon Chart, starting the ‘Girls’ Generation’ craze in Japan.

Especially this Girls’ Generation craze captured the attention of not only the popular culture circles of Japan but also the economic circles, and the first solo concert held at Taipei Arena, Taiwan on October 15 and 16 set the record of bringing the largest number of audience as the foreign female artist and once again proved that they are the best girl group in Asia.

Accordingly, the new mini album ‘Hoot’ is expected to receive excellent responses from fans in Korea as well as Asia, and eyes will be drawn to their music, the new style titled ‘Retro Power Girl’ themed after a lovely spy, and their performance, everything about Girls’ Generation.

This album also contains five songs including the title song ‘Hoot’ filled with a variety of attractions bringing more mature vocal skills and expressiveness of Girls’ Generation, and WHEESUNG who participated as the lyricist and hit composers such as Jinu, Kenzie, and Hyun Hwang made the perfect album better.

The title song ‘Hoot’ is a rhythmical song combining retro style guitar sound with go-go rhythm. The characterful voice of each member of Girls’ Generation is clearly heard throughout the song to deliver more colorful attractions to listeners. ‘Hoot’ is a sound word in Korean that interestingly expressed the short laughter, and the cute warning in the lyric given to the boyfriend who hurts the girl’s heart as if he is shooting arrows to the heart doubled the bright and cheerful mood of the song.

‘Mistake’ is the first song that Yu Ri wrote the words for, and the lyric depicting the emotion of a girl brings the sense of expectation. This song captures ears as it is the first authentic R&B ballad that Girls’ Generation sings. Another song in the album, ‘Snowy Wish,’ is the love song brought by Girls’ Generation for the lovers enjoying the first winter together, and it is expected to become quite popular this winter with the mood that gives the image of the snowy day and the beautiful melody.

Also, ‘My Best Friend’ that outstands with the exciting and cheerful melody depicting the friendship and love between members of Girls’ Generation and ‘Wake Up’ that describes a sad message to the lover in a plaintive mood are included in the five songs of the album.

Girls’ Generation on October 19 made a surprise release of the teaser site announcing the comeback and became a press topic, and the site was designed in a interesting way where it shows a part of the title song or new images of each member of Girls’ Generation when the user hits the spinning dart plate with the arrow that it brought explosive responses from netizens.